That's right - we hosted our first Christmas here in West Chester and had 12 people stay over. It was nice to have everyone here and not have to rush them out at night. Everyone arrived on Christmas Eve (all at different times), we went to Christmas Eve mass and then had a big feast to follow. The first night we had a standing rib roast, grilled salmon, mushroom risotto, and asparagus. My sister in law Asia's mother and niece were in town from Poland so they brought some amazing dishes as well! Henry opened a magnum of really good wine (in which I couldn't indulge) and we all just sat around the dinner table and talked. I was exhausted and called it a night around 10 and the guys built a fire in our outside fireplace (the guys took turns going up into the woods and bringing small trees back) and drank more wine and enjoyed their cigars.
Christmas day we all got up on our own schedule (we got up on lil Henry's of course) and just enjoyed the morning. Henry built another fire and we kind of just did as we pleased. We opened presents mid morning which took a LONG time :) Around 1:30pm we all sat down and ate our Christmas lunch/dinner. We had baked ham, fried turkey, garlic mashed potatoes, cornbread stuffing, cranberry sauce and green beans. It was so yummy! We just relaxed the remainder of the day. Thomas, Asia and her family had to leave late afternoon so we had 4 less people Sunday night. That evening we were all still stuffed so just sat around the T.V. and watched Christmas movies.
My mom was able to stay through Wednesday so the house is pretty much back in order - but talk about laundry - WOW!!
Photos are somewhat out of order - forgive me :) 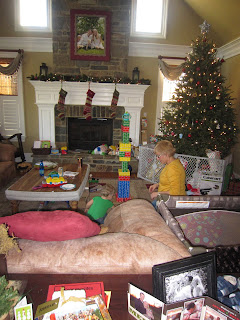 My mom keeping Henry busy while we prepare everything 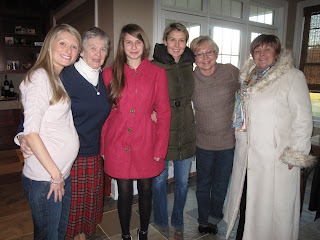 All the women of the weekend 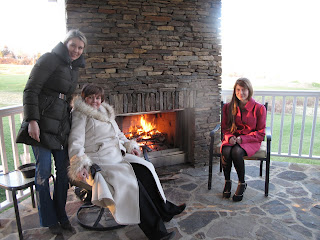 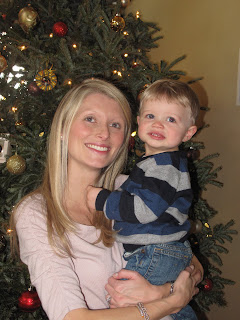 Henry and I - Christmas Day 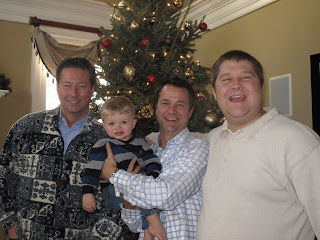 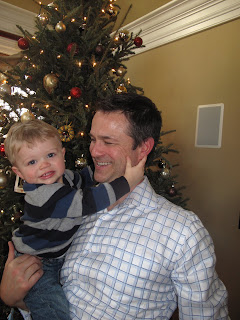 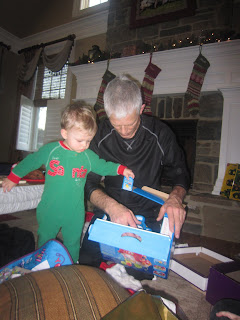 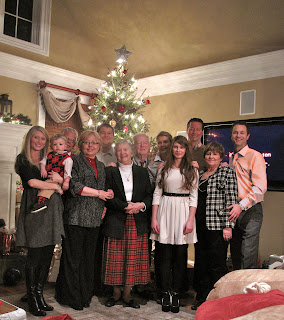 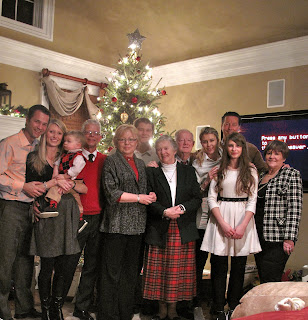 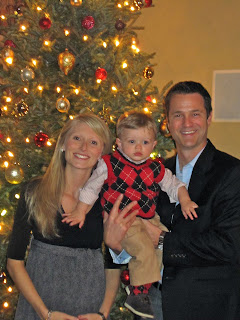 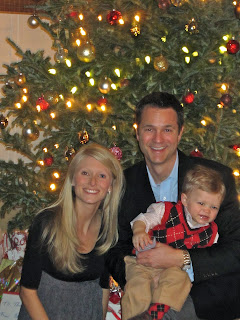 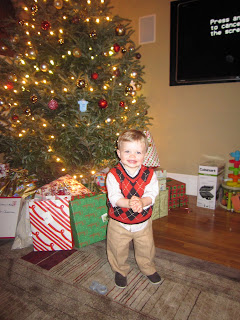 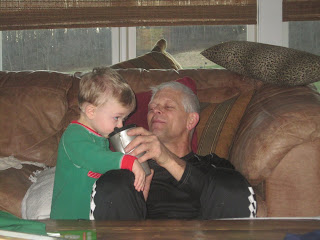 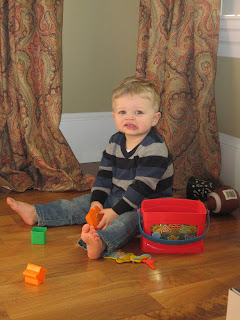 Enjoying some quiet time in the corner - Christmas Day 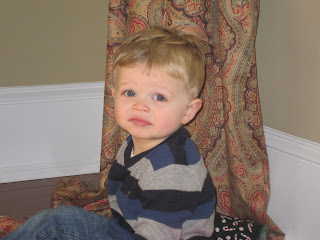 Love him
So that's our Christmas in a nutshell. It was such a blessing to have everyone together!
Posted by Tara at 7:14 AM 1 comment:

Email ThisBlogThis!Share to TwitterShare to FacebookShare to Pinterest
Labels: Christmas 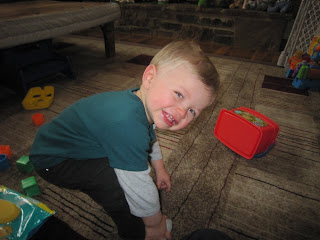 Henry's 16 month birthday fell on my 29th birthday - so we did a little celebrating together!! We spend our morning cuddling up on the couch with books and singing - he played his Leapfrog birthday cake over and over and over for me :) After lunch we went for a car ride (while jamming to some Christmas music) and Henry had his second haircut. This little guy has so much hair - it's crazy! He was very good at his appointment amazingly (lately he seems like he has ants in his pants 24/7).
New favorites:
He loves throwing things away and he's such a neat freak. He picks up every pine needle he finds on the floor and walks over to the trash to throw it away!
He loves reading me his books and we're really working on his vocabulary. Newest saying is when you ask him what Santa says "Ho, ho, ho"
He LOVES to go up and down the stairs - we play a little game where I throw the ball up the stairs onto the landing and he chases it. It's great exercise for the lil man!
He loves to push his umbrella stroller all around the basement. He also enjoys climbing on the treadmill and pretending to run (like mommy!)
Henry still loves himself a grilled cheese. He is such a great eater - he even loves brussel sprouts just like his mama
A new thing : He will come over and rub my belly and then pretend to cry like a baby - it's hilarious. My mom brought him my old magic bottle baby doll and he imitates the noises that the bottle makes :)
He LOVES his milk! He drinks 24 oz a day and would drink more if I would let him. We're working on getting him to drink it cold - but he still prefers to have it slightly warm, whatever works!
He's been sleeping from roughly 7pm-6/6:30am. He still takes two naps, but I think I may cut it down to one soon - we'll see!
He has his first set of molars in and overall has done great with them coming in. Total teeth count is 12.
I'm sure I'm leaving out a lot, but this mama is tired and going to retire for the evening.
Posted by Tara at 8:05 PM No comments:

Email ThisBlogThis!Share to TwitterShare to FacebookShare to Pinterest
Labels: Status 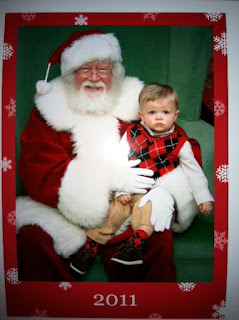 Email ThisBlogThis!Share to TwitterShare to FacebookShare to Pinterest
Labels: Santa

Thursday I had another ultrasound to make sure that baby is growing. I was a little anxious going into the appointment. Amazingly enough - baby already weighs 4 lbs 6 oz and is measuring just under the 50% percentile. Such a relief!! Everything else looks great with Baby C #2. He/She was being a little stubborn and wouldn't turn over so that we could see the face clearly enough to get a 4D shot - but I can't complain because I already have two great ones.
After the ultrasound, I went to the lab to get my blood work done. I should know the results of that by my next appointment which is this coming Wednesday.
Then, after my blood work, I had an appointment to check my weight, BP, urine, and heartbeat.
Weight - I gained a pound. According to them I've now gained 15 lbs.
BP - 120/78; still a little high for me so we're watching that closely
No protein in urine
Baby's HR - 136
I'm now measuring at 28 weeks - 6 weeks behind. A little strange since last week I measured at 29 weeks. The doc was just thankful for ultrasounds, otherwise they'd be greatly concerned with the size of my tummy.
Overall I'm feeling great - no complaints really!
If I follow suit as to when I had Henry - I only have 4 weeks left - WOW!!
That's it for now - have a great weekend!
Posted by Tara at 7:30 AM No comments:

Email ThisBlogThis!Share to TwitterShare to FacebookShare to Pinterest
Labels: Status

Last week was a hectic one. On Tuesday our babysitter for Thursday (8am-7pm) had to cancel due to having the stomach flu :( I was super stressed because finding another sitter (who you can trust and be in your home ALL day with our love bug) isn't easy. Luckily that same day one of our other sitters who is in grad school called me to say that her classes just ended and to let her know if we ever needed her during winter break. Let's just say I was elated with that news. Prior to finding this out I was searching high and low for someone to come over and meet with us prior to Thursday - but it all worked out - WHEW!! My mom took off from work Friday and came down Thursday evening - and when she is here, all my worries are gone! My dad and Maggie came Friday night so Henry had a friend to play with all weekend!
So Thursday morning Henry and I left the house around 8:30am en route to NYC for the long weekend for Henry's work Christmas party. We first had to stop in the King of Prussia mall area for a meeting of Henry's - so I did what any other childless mother would do and shopped at the mall SOLO! Around 11:30 we headed into the city to grab the train to NYC. The train is always so relaxing to take - no traffic and only 1 1/2 hours and you're in the heart of NYC. We got to our hotel room (right in Time Square) around 3pm and I relaxed and Henry was off to meetings. One of the perks of Henry's frequent travels - we were upgraded to a club level suite and in NYC that means a lot since they try and squeeze as many rooms into the building as humanly possible.
Each night they had dinners planned for us. The food was amazing and meeting everyone was a lot of fun. It's always nice to put faces to the names I'm always hearing about. I've met a bunch of them, but his company keeps growing so there's always someone new. We walked EVERYWHERE and were able to see all the sights the city has to offer. During the day on Friday the guys had meetings so the ladies met up and just shopped and walked all day. We left Friday morning at 10am and didn't get back to our room until 5pm - and we had a blast!
On Saturday we all went to see the Broadway musical Memphis. I didn't know too much about this prior to going but it was such a great show! We were in the 3rd row center and had an amazing experience!
Note: Don't mind my tired eyes in some of the following photos - being 33+ weeks pregnant and staying out until 1:30 am some nights isn't quite ideal! 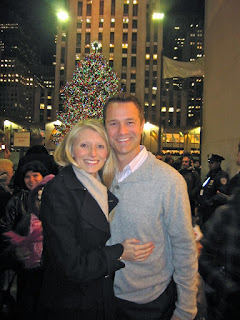 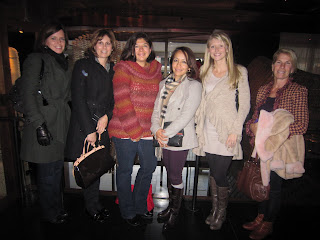 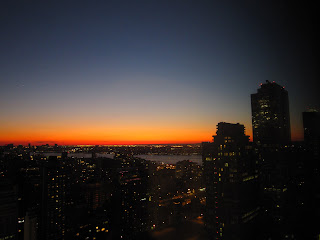 (View of sunset from our room) 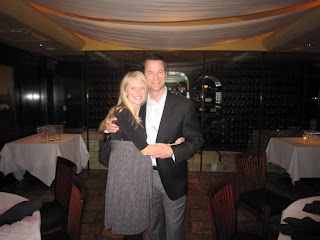 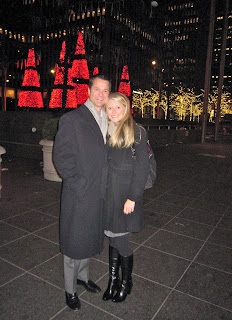 (On our walk home from Saturday nights dinner) 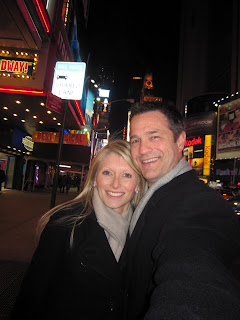 (Time Square on walk back to hotel) 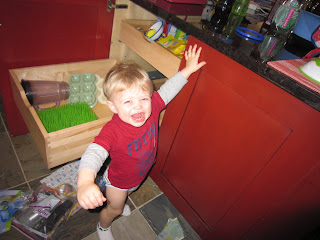 (What we came home to ;))
I'm sure I'm leaving something out - but you get the jist of our weekend! It was a lot of fun but tiring. I spent Monday recovering with a lot of rest!
Posted by Tara at 7:55 PM No comments:

Email ThisBlogThis!Share to TwitterShare to FacebookShare to Pinterest
Labels: NYC

Last Wednesday (12/7) I had my appointment with Dr. K. I had a sitter come and watch Henry (even though daddy had a home office day - he can't really be on calls and watch the lil guy at the same time) and I'm super happy I made the decision. My appt was at 9:15am and only had to wait in the waiting room for like 5 minutes. Well once I got back to the room, the patient beside me had some sort of emergent event happen, therefore I had to wait a LONG time in the room. I didn't mind really, but if I had the little guy it would have been pretty painful.
BP: 120/80 - slightly higher than normal and fairly high for me, but still in the normal range
No protein in urine
Weight: I actually lost a pound (Yikes), total pregnancy weight gain - 14 lbs
Baby's HR: 159
So an hour or so later (after many apologies from the nurse), Dr. K walked it. He measured my belly and I'm currently measuring at 29 weeks - so about 4 weeks off (he contributes it to me be thin and having a long torso). Because of this I am getting an ultrasound this Thursday, along with starting weekly appointments. So this Thursday I will have my ultrasound, get my blood work done and have an appointment. Let's just hope that the baby is just tucked away in there and hasn't stopped growing! With this news I also get to start drinking Ensure Plus - who's jealous?? I also was told to rest more (hard to do with an almost 16 month old) and lay low on the exercising.
33 week photo: 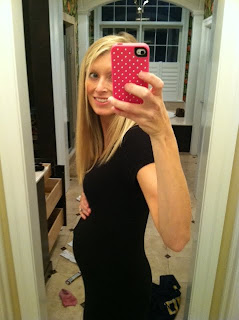 (Don't mind the mess on the bathroom floor - that's what it looks like when I let Henry play while I try and get ready :))
Posted by Tara at 9:10 PM No comments: