Last weekend was a gorgeous fall weekend. Saturday we woke up to a perfect day for the orchard. It was a bit cloudy, but cool and welcoming for a little apple cider and donuts! We left after Henry's morning nap and the greatest part is that the orchard is seriously 1 1/2 miles from our house (a perk to living out in the boonies!) It was quite chilly, but with a hooded sweater, jeans and the Ergo, the lil man was nice and toasty. We had such a great time. We stopped by the petting zoo first, but I didn't let Henry get too close just because he was already fighting a little tummy something or other. -Side note: He was fine and acting totally normal just had loose stools (TMI; maybe), otherwise I wouldn't have taken him out and about!- 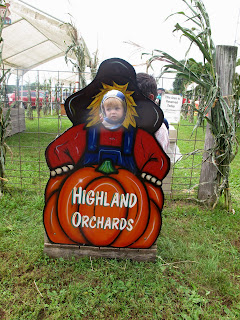 We started off with a little cider and a donut or 2 and then set our for the hayride to the apple trees. 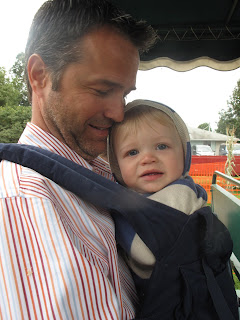 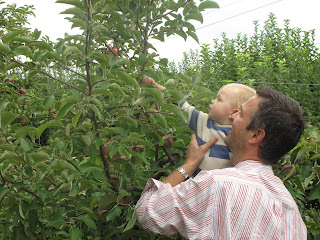 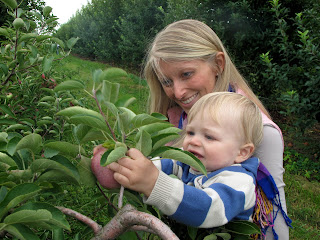 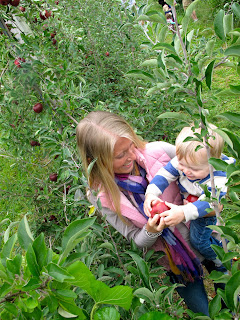 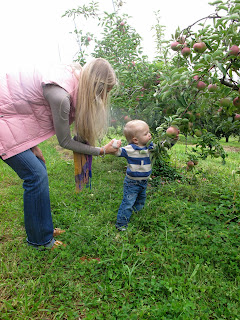 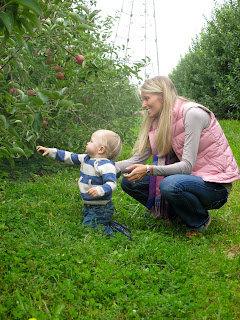 We had such a great time picking our 1/2 peck of apples and they are SO delicious!
On Sunday, West Chester hosted their annual Restaurant festival. We went to the normal 10:30a mass and then headed out of the church doors right to the festival (it was literally a block away!) They shut down the streets down town and about 110 restaurants and shops have stands. It was the most gorgeous day - 75 and sunny with a little breeze. We met up with one our neighbors and had lunch together. We were so glad we went early because it got crowded quickly. They also had a beer garden so I can only imagine the crowd after we left :)
I carried our camera with us the entire day and not once captured a photo of all of us :( I did get a photo of the lil guy with my phone while doing a little change-a-roo in the back of the car! He looked too cute not to post! He's getting SO big SO fast - he looks like such a little boy now! 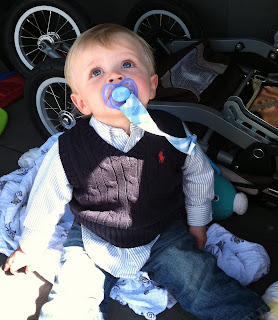 It's suppose to downpour ALL weekend so I'm not quite sure what our plans will be. Daddy and I are doing date night saturday, but other than that we're up in the air with plans!
Have a great weekend everyone!
Posted by Tara at 2:53 PM No comments:

A week at the beach

Never trust a weatherman! Of course I was hyper focused on the weather prior to going to the beach - checking it a couple (ok, way too many) times a day. They had projected rain all but 2 or our 8 days at the beach - a bummer: yes, but hey you're at the beach so life can't be too bad! It rained on our way down and then we didn't see rain again until we left the following Thursday night! It was a gorgeous 75-85 degrees each day. Each morning Henry (daddy), myself and lil Hen went for a run on the boardwalk. So refreshing each morning - and what a great way to start the day! We usually went to the pool in the morning after Henry's morning nap, came home for lunch (we were seriously 1 block from the pool/beach) and then went to the beach after Henry's nap! Needless to say, Henry was exhausted each night and slept super well!
Henry's parents stayed with us the entire week which was very nice. Daddy still had to do some calls (which he planned for Henry's naptime), so during Henry's naps, Henry's parents listened for the lil guy and I was able to go to the pool and/or beach and enjoy myself for a few hours! (Wow, there were a lot of Henry's in that little paragraph!!!) Friday we had Henry's younger brother, Henry's older brother and wife, and Henry's cousin. My parents had to work (bummer) and couldn't make it down.
Henry took to the beach like a fish in water. He just couldn't get enough of it. His first touch of sand was quite hilarious. He ate his fair share of sand and LOVED standing in the waves. 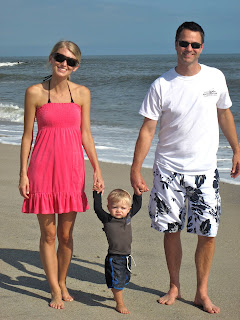 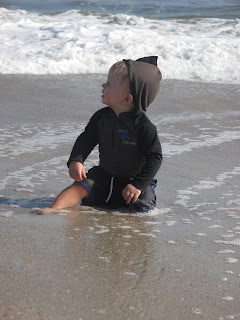 When we left for the beach Henry was walking really well, but still crawling every now and then. I couldn't believe how well he was walking in the sand. We came home to a lil boy who just RUNS everywhere! 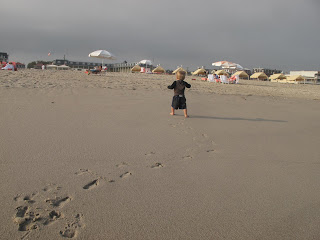 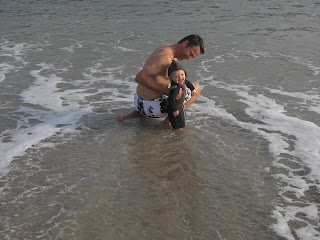 We stayed in each night and cooked dinner, except for 1. Our last night we went to the Lobster House with Henry's parents. It was SO good and I'm pretty sure I ate my weight in lobster and shrimp! 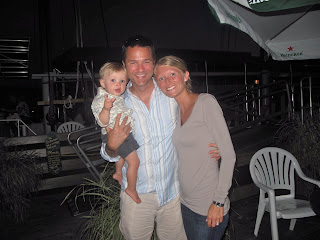 Before we left, we had to get some family photos. We took a TON, but I thought I'd share a few with you! 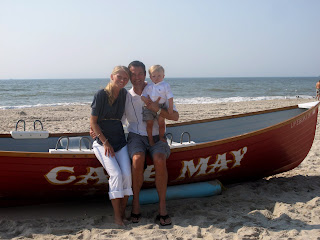 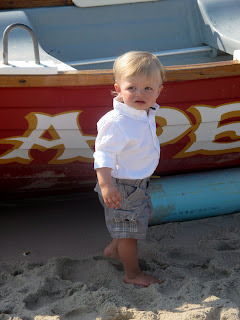 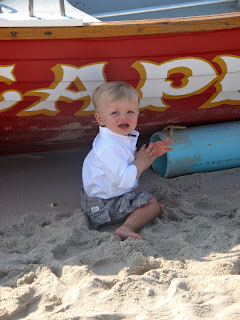 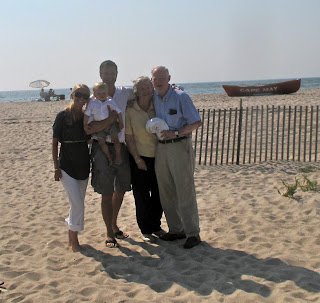 All the laundry is FINALLY washed and put away and we're back to our usual routine. We've decided to make this a week we do each year...it was that much fun!!
Now it's just time to put all the shorts and tees away and pull out the sweaters - crazy how quickly it got cold!
Posted by Tara at 3:10 PM 2 comments:

Email ThisBlogThis!Share to TwitterShare to FacebookShare to Pinterest
Labels: Beach 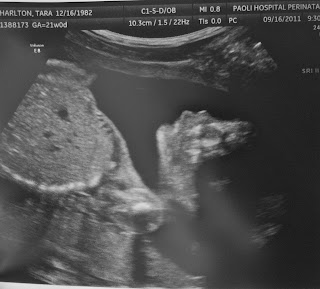 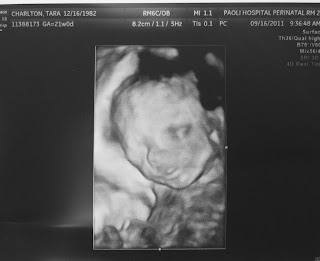 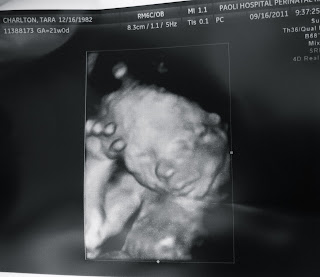 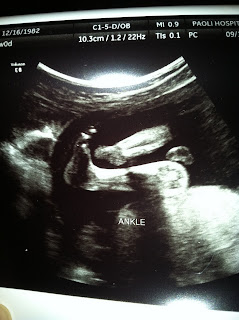 On Friday, I went in for the ultrasound. I scheduled it for 8:30 am so we could be 1 of the first appointments. What a great idea on my part I might add - by the time they called us back (around 8:40ish) the waiting room was full! We had such an awesome ultrasound tech. Last week they received their new machines so the very nice lady did the 3D ultrasound for us for fun. Such a cool experience. When she zoned in on baby #2, he/she immediately stuck out his/her tongue, wiped his/her eyes and gave us a big kick!! Neither she or the perinatologist looked at the sex of the baby.
At this juncture in my pregnancy, I'm feeling like it's a girl. I'm not sure if this has been inspired by my cousin just having a girl and my other cousin's lil girl (of which I both follow via their blogs) or if it's true feelings?? I've had 2 dreams so far so I guess only time will tell. I'd be completely happy with either...I'd just like to have 1 girl in our potential 4 children family!
20/21 week stats:
Baby is a mover and a shaker. Per the ultrasound tech the baby's head is resting right on my bladder - lovely! I first felt baby move in the 14th week which was earlier than last time - but typical of the second pregnancy. Henry is now able to feel baby moving and it's such a fun experience! Also, lil Henry get's a little confused I think - I'll be rocking him and the baby will give a swift kick and he just picks his head up and looks at me like "what was that?"
I've gained 8 lbs thus far. My ob/gyn has projected me to gain 20 lbs again this pregnancy. Via ultrasound baby is growing right on target and weighing in at 14 oz - 1 lb.
Still working out. While at the beach I went for a run each morning while Henry pushed the stroller - missing those runs!
My belly is finally pooching out just a tad. My belly button on the other hand has popped :( Lil Henry thinks its a toy or something and if I'm lying down he will come over and keep pushing it in!
Cravings - nothing really. I've been eating a lot of fresh fruit, veggies and drinking a lot of water.
Aversions - pregnancy turns me into a semi-vegitarian. It's so hard for me to eat meat while pregnant...but I try my best.
Complaints - none
Thus far my blood pressure has been great. The perinatologist explained to me that a new study was conducted and if you're going to get preeclampsia, it is determined when the placenta is implanted into the uterus - so by 3 months you can now know, however there isn't anything they can do. I'm just saying lots of prayers for a healthy pregnancy!!
Check back later for photos from the beach!
Posted by Tara at 7:04 AM 2 comments:

Email ThisBlogThis!Share to TwitterShare to FacebookShare to Pinterest
Labels: Baby 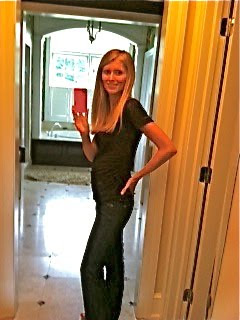 (Don't mind the poor quality from me trying to take a pic of myself with my phone)
20 weeks - wow time flies! If things goes as planned like the last pregnancy (minus all the complications) I'm actually more than halfway there...only time will tell!
We are down at the beach for a week and loving it. I took a nice morning run while daddy pushed Henry in the stroller all while he waved and talked to everyone (lil Henry that is). It's a beautiful 70ish degrees down here - not sunny yet but no complaints on my end! We rented a beautiful victorian home that sleeps 12 and all the family is coming in today. A little history - Cape May, NJ is the Victorian capital so to say. It is a beach town with old world charm. At night while rocking on the wrap around porch, you hear the clickity-clack of the horse drawn carriages and love is in the air! It's such a family friendly town and so peaceful!
Ok a random post - but hey better than nothing! Henry just woke from his morning nap so I have to get going!
Enjoy the weekend everyone!
Posted by Tara at 10:00 AM No comments: