Baby it's cold outside... 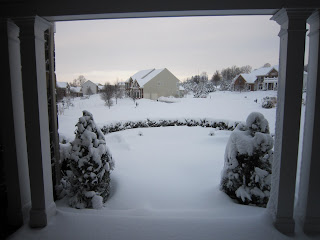 This is what we woke up to yesterday morning...18 inches of snow here in West Chester!! What's a mama to do on a day like this other than spend the day inside cuddling up with baby Henry.
The snow started Wednesday afternoon, with us getting around 4-5 inches. Henry was a very kind soul and used his new toy and did all the driveways in our cul-de-sac, 5 in total. 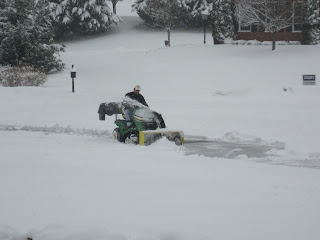 The lil man really wanted to help daddy and/or go outside and play in the snow, but I, the mean mommy didn't feel comfortable with him being out there with his cold that is almost gone! I love these boots that we got as a gift, I tell you, Henry has more clothes and accessories than I could ever dream of owning :) 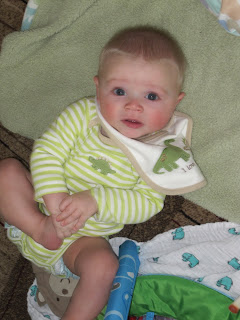 "Please can I go outside?" 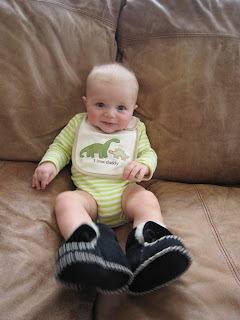 The boots look enormous because for those of you that know Henry he never keeps his legs still!
Even with his John Deere it was hard with it being a very heavy, wet snow...so the lil guy was nice enough to wait until daddy was done so they could take a nap together!! 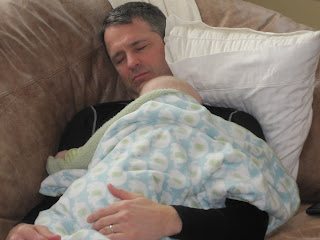 So yesterday, while (big) Henry was outside snow blowing, I decided to make a little treat for him. These are actually quite healthy and really good!! I got the recipe from health magazine. I change them up a bit with using almond milk and crunchy peanut butter instead, and this time I actually added a little bit of flour to get them to stick together a little better! 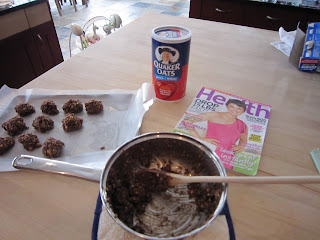 If you look closely, you can see Henry helping me while in his swing!
That pretty much sums up our day other than running a few errand after the snow was cleaned up outside. We do have to thank Aunt Candy for our cute outfit of the day!!Red is one of Henry's favorite colors, he just can't stop looking at it! 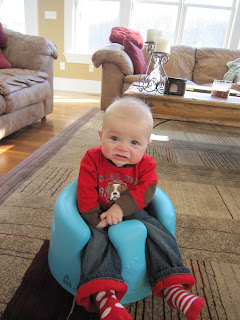 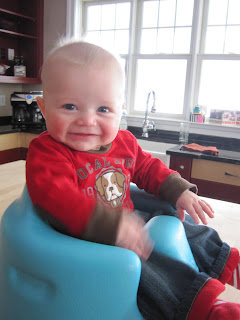 Oh what a day it's been!! Everything was going as planned: we got up around 7ish and the cleaners arrived around 8am. We played ALL morning; sang, read, rolled over until I was dizzy, Henry took his nap, I packed for the week (I was going home to Camp Hill so that I could take my mom to her appointment Thursday), the cleaners left around 2ish. I had all bags by the back door ready to put them in the car (it still amazes me how much stuff you have to bring with you even if it's only for 2 days!!!), I walked into the garage and saw what looked to me like a waterfall!! One of the bathroom pipes must have broken and it was coming out of the ceiling at a serious rate!! I immediately called Henry, he told me to "put the phone down and go out and take the ladder downstairs so you can shut off all the valves, I say put the phone down because the ladder is very heavy!" He wasn't kidding, that ladder weighs more than me I swear...it took all my strength to get it in from the garage and down the stairs...but I did it. A little side note: the baby was crying during this whole ordeal which only made it more stressful! He had one of his co-workers who lives a mile away come over to help me and as it stands now, we still have the water shut off! Henry decided to leave his meeting early and fly home from Virginia tonight...not gonna lie...selfishly happy that he is coming home early!!! Plan is to have the plumber come out tomorrow to fix everything...we are just lucky that it was the bathroom above the garage and not the one above the kitchen!!!
So since I had an unplanned day here at home, why not snap some photos!!! 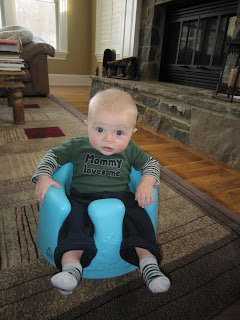 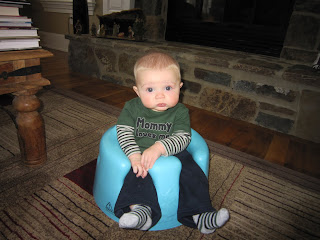 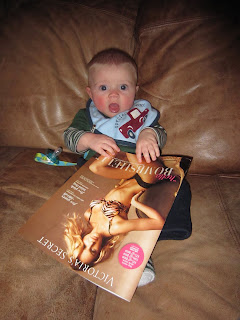 A little play time before bed 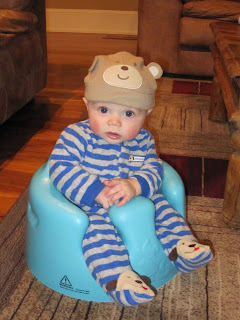 Email ThisBlogThis!Share to TwitterShare to FacebookShare to Pinterest
Labels: Henry

Some of Henry's firsts

The past two weeks have been weeks of firsts for Henry, well isn't everyday a day of something new?? Some have been good and some...well not so good. I guess we can say it all started December 26th, a day here in West Chester that it decided to snow heavily. We had just returned from Camp Hill where we were celebrating Christmas with both families. I had noticed a few red dots on Henry's ear, but didn't think too much of it. Well when we got back home on Sunday, I noticed that it had really spread so I decided to call the after hours nurse at our Pediatricians office. I knew from being a nurse that this wasn't a rash, but it was worse, it was petechiae (the red dots) and purpura (the dots that were more purple). I pretty much knew even before calling what my answerwould be, but I thought I'd call just to make sure. After I got off the phone I told daddy that we needed to pack up the baby and get to Paoli hospital. With the snow it took us almost 45 minutes to get there. Once there, the PA told me, "Babies get rashes, you're probably just overreacting!" Little did he know that I work in the worlds largest and best Children's Hospital here in Philly!! After trying to discharge us 3 times, I finally won and got the MD to come in and draw labs. My intuition was right and little Henry's platelets had dropped to 13,000 (a normal count is 150000-400000) This meant that he wasn't clotting his blood correctlyand all the dots were little spots under his skin where he was bleeding! We were then told it could be two things, he could be fighting an infection or he had leukemia and we neededto go to CHOP (the Children's Hospital of Philadelphia) immediately. Who just sits there and tells parents this?? Leukemia...I almost vomited on the floor right there and then! We were then rushed to CHOP in an ambulance! Once there we were reassured that he most likely didn't have leukemia but the labs would tell us!! Henry was smiling and kicking with excitement from all the attention the entire time!! Well to make a long story longer :)...we ended finding out he didn't have leukemia, but probably ITP, which means he may have been fighting a bug and his platelets were attached by antibodies. We are getting followed by Hematology for the next 6months just to keep a close eye on him!!
Here's a pic of him thoroughly enjoying his hospital stay! 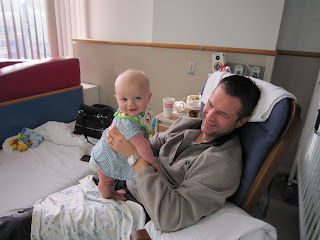 As for a few great things that have happened!! Henry turned 5 months old January 16th and we got to start rice cereal!! We got a video of it, however when daddy was shooting the video Henry was more interested in that than the cereal but we did get some great photos!! 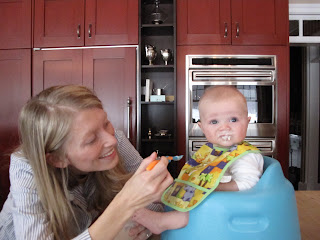 In January mommy and daddy were able to go on an overnight date!! We went to the Lemon Ball with funds Alex's Lemonade Stand and Cancer Research!! A little background, when Alex was 4 she was diagnosed with leukemia and decided that she wanted to start selling lemonade to raise money for cancer research. The work spread and families and companies everywhere were hosting lemonade stands. Alex lost her battle at the age of 8, however the lemonade stands are still being held and it has become the largest Cancer Research fund in the US!!! She was treated at CHOP where I work so the story hits home with me! We stayed overnight in downtown Philly and were able to get all dressed up! 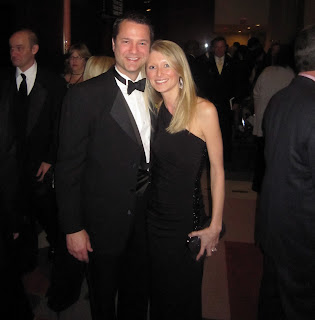 Another first, Henry has his first cold!! I think it hurts me more than it does him!! His cough sounds horrible, however he hasn't stopped smiling!! We've been using the cool mist vaporizer (we have the Vicks starry night which I highly recommend!!) and he seems to be improving each and every day!!
We've also been working on rolling from back to belly, and yesterday he did it all by himself!!!! It's amazing to see how much he's grown in the past 5 months...too fast if I have any say in it!!
Posts to come: I'm going to try and back track a little to catch everyone up on Henry!! Stay tuned for Henry's statistics related to growth and devolopment!
Posted by Tara at 8:33 AM 3 comments: