We had yet another wedding this past weekend, so my parents came to our place so that we could make the drive and stay over instead of having to rush home. It was a nice little date night, however I'll admit I can't sleep in anymore. I was up at 6am like clock work!
The wedding was beautiful and they could not have wished for better weather (especially since it was an outdoor wedding)! It was also a mini college reunion! Four of my closer friends from nursing school were there, 1 being the groom. We truly had such an amazing time! 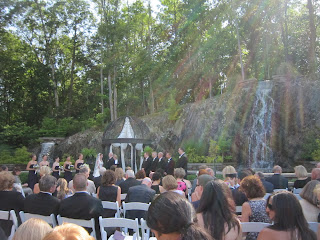 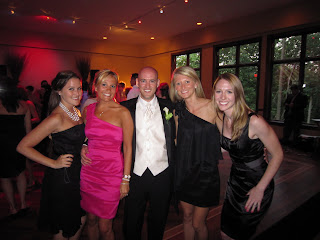 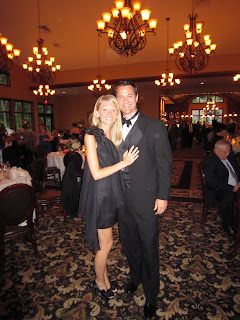 My mom decided to take Monday off so that she could spend the day with Henry and I. It worked out great since (big) Henry had to leave for business Sunday night. My mom decided to bake me banana bread since I've had a huge craving for it lately (or always :)). I say it was 'bittersweet' just because for those of you that know my mom's baking abilities, "you can't just have one (slice)!" That being said, I ate the entire loaf (minus the 2 pieces my mom ate) in 1 day, yes, ONE day! With all this nausea I'm experiencing, in Henry's words: "At least you got your caloric intake for the day." Let's just say it was that good and I didn't feel the slightest bit guilty for doing it :) The worst part, I woke up today and could have really used a piece or 3 of it!
After saying that, I should probably go downstairs and run a few calories off, but I've opted to sit here and blog instead!
Posted by Tara at 7:53 PM No comments:

Email ThisBlogThis!Share to TwitterShare to FacebookShare to Pinterest
Labels: Bittersweet

Our family of 3 has recently become a family of 4. It was confirmed yesterday by ultrasound! Baby #2 is expected to arrive somewhere around January 27, 2012!

Henry saying 'hi' to his brother or sister!
We will post pics and updates from this past weekend soon!!! It was an awesome weekend and we're still winding down from it!
Posted by Tara at 3:16 PM No comments:

Email ThisBlogThis!Share to TwitterShare to FacebookShare to Pinterest
Labels: Baby

Henry received a rocking horse as a gift a while back, however I never put batteries in it...until last night! I'm not really sure where he got his moves from, but I'd say he's a natural! Enjoy!
Posted by Tara at 10:01 AM No comments:

Email ThisBlogThis!Share to TwitterShare to FacebookShare to Pinterest
Labels: Horse 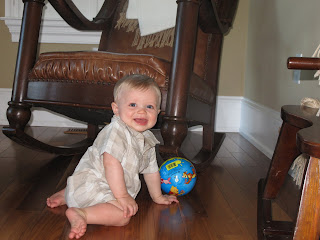 We had our (delayed, because Henry's doc was on vaca) 9 month appointment on Tuesday and here are the numbers:
Weight: 18lbs 6oz (11.41%)
Height: 27.75 in (21.81%)
So he's gained about a pound since his 6 month appointment and grown an inch. I blame the weight on the fact that he seriously can't sit still. We're almost out of his 9 month clothes and I really don't like the fact that a lot of companies do 0-3 month, 3-6 month and then 6-12 months. I mean, they grow a lot in that time period. We've been wearing a lot of rompers just because they are a no hassle way of getting dressed each day and it keeps him cool in this heat wave we're experiencing.
New milestones; more cruising around the furniture, more standing without holding onto anything and he keeps practicing standing solo from his knees/sitting position, but we're not quite there yet. He LOVES pulling all his toys out of his basket and taking each book out of the basket while looking at me and then dropping it on the ground and laughing! He LOVES feeding himself and has become quite independent. We're saying dada a lot, however we keep practicing mama and he continues to say dada and smiles.
Feeding; he will eat anything and he really is the greatest eater. We're still on our non-soy/non-milk based formula, however I got the ok to start weaning him onto a milk-based formula to see if he tolerates it. I'm going to wait until we get back from NE to start that just because I don't want him to have tummy aches there! Once he's tolerating the new formula, we can introduce him to foods with milk in them and then hopefully (crossing my fingers) we can start whole milk at 12 months. They won't send us for testing unless by 15 months he's still not tolerating milk. I have to admit that's the hardest part right now with feeding him. I can't just give him anything, I have to read each ingredient to make sure it doesn't contain any milk or soy or any of their proteins. That REALLY limits our variety so I just make everything myself for now.
We are really looking forward to next week! Henry's getting on his first big plane and visiting all the family in Nebraska. Henry's super excited to see all the puppies and cousins...and of course wear his tux!! 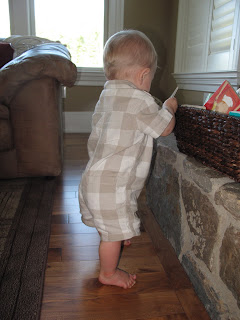 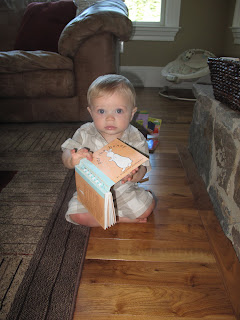