So our Sunday started out like any other weekend day. We got up, daddy and Henry played with block and mastered building towers and knocking them over, and we went to church at 9am. Henry loves church, he just sings and talks the entire time! It's funny because when I was prego, he was always super active in church! 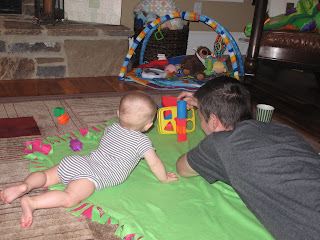 When we came home, we made a nice brunch, daddy went into the office to do a little work and Henry and I continued to play with blocks! 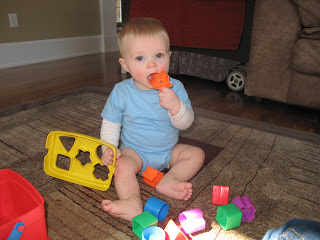 When daddy was done in the office, we decided to go for a nice walk around the golf course. This was around 3:30pm. Henry just talked away on the walk and was wide awake. During our walk, (big) Henry and I talked about going out to dinner since it was such a nice night and he was leaving today. So we came home around 4:15pm and I fed Henry. Well I guess we can say he wears the pants in this household because he fell asleep during his bottle, and he was OUT! I didn't feel like waking him to feed him his dinner because he didn't really nap well yesterday. So we let him sleep. He typically isn't a great napper, and usually only sleeps like 30-45 minutes. We don't complain just because he sleeps 12+ hours straight at night. Well, he must have wanted to stay in for the night because he slept for 1 1/2 hours, which then forced us to stay in because by 6:30-7 he's SO ready for bed! 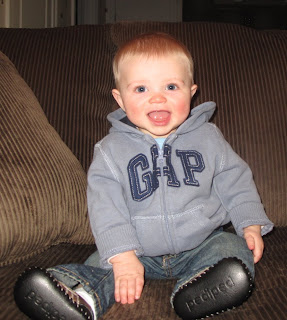 Well, when he woke up I can tell you he was WELL rested! I go to feed him his dinner and he has it EVERYWHERE!!! He usually is pretty good with it and likes his food so much he eats every bite...not tonight. He had it in his hair, up and down his arms and as you can tell ALL over his face! It was bath night anyway so I didn't really mind. 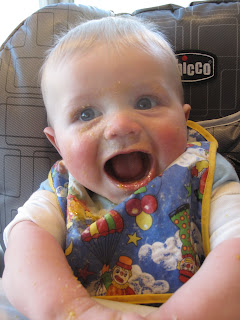 So I take him upstairs to bathe him, and this is where the fun REALLY begins! I put him in the tub and he decides to poop...lovely! So I promptly take him out, clean him off, lay him on the floor and clean out the tub (both big and small) and refill it. I put him back into the clean bathtub and he is having a great time. He had such a great time that he had ALL the water splashed out of the tub...I kid you not! There was only an inch of water left and I'm not sure who was more wet, Henry or I! He LOVES bath time, but last night more than any! I take him out and start drying him off and we're just singing, I uncover him to put lotion on him and he starts to potty...why not right?!?!? He starts laughing which then makes me start laughing! I knew at this point that he was going to sleep great since he expended all his energy!
Thanks to Aunt Heather and Uncle Andi, we had this super cute outfit to put on once we were clean...thanks!!!

So that sums up our Sunday!! Henry and I ended up cooking a light dinner, drinking a beer and watching a movie, a great way to end the weekend!
Posted by Tara at 9:25 AM

Email ThisBlogThis!Share to TwitterShare to FacebookShare to Pinterest
Labels: sunday