I survived New Orleans at 24 weeks prego and had an AMAZING time!! It was definitely the hardest it's been leaving lil Henry - he just kept saying 'mama' as I walked out the door! He was in good hands; my mom took off Thursday and Friday so she could be with him for the 4 days we were away.
I arrived Thursday and Megan and Joseph picked me up from the airport. Henry had a meeting scheduled last minute so he was in Atlanta and met us there Thursday evening. Megan and Joseph gave me the grand tour of New Orleans, including a Po Boy (kinda like a hoagie) to start, tour of where Katrina hit (they were actually living there and lost EVERYTHING) and then Megan and I walked around downtown and shopped while Joseph did some work. We got to the hotel around 4ish and had 6pm dinner reservations. This worked out perfectly so that I could put my feet up for a bit and then get ready. Henry met us at dinner Thursday night at a place called Galatoire's, right on Bourbon street ironically. It's a super nice restaurant, right smack in the middle of all the craziness! Dinner was phenomenal and we were officially stuffed so we decided to hit a few Jazz bars afterwards. Friday we had reservations for brunch at a place called Brennan's in the French quarter. Let me just say, we ate SO much we didn't eat again until 8 pm that evening. After brunch we walked around for a little while to help digest and see all the neat shops. Around 1 pm we headed out of town to Megan and Joseph's house. They live 30 minutes away from downtown and 24 miles of it is one bridge - kinda cool. We hung out there for the afternoon and while Henry and Joseph had they plan and review for the next quarter, Megan and I headed out for a long walk with their two boys, ages 2 and 4. That evening Joseph's parents (who live across the street) prepared dinner for all of us. To sum it up - it was amazing but very rich. We had a early start planned for Saturday so I called it a night pretty early while the guys had they bedtime cigars. Saturday was the LSU vs Florida Gators game. We left the house around 9 am, after having croissants and beignets (a LA pastry) and headed to Baton Rouge, about an hour away. The LSU tailgates are unreal. The tailgate we were at had a band, a cook preparing LA food and like 300 people...and that was just within our tent. It was CRAZY...but a lot of fun (even though I was hydrating with my H2O). The game started at 2:30 pm and it was a great game for LSU. We ended up leaving at the beginning of the 3rd quarter to 1) beat traffic and 2) they were killing the gators. I was secretly very happy since my legs and feet were killing me and it was 87 degrees out with A LOT of people! We headed home and had dinner. Our flight was early Sunday morning so we hung out for a little while, said our goodbyes and thank you's and got some much needed rest.
To sum up our New Orleans trip - we ate A LOT!!! I could never eat all that heavy, creamy food on a normal basis.
It was such a great getaway - but SO nice seeing the lil man (and my mom). I missed him so so so much. When I was putting him to bed Sunday night he just kept lifting his head up, looking at me and smiling - heart melting! 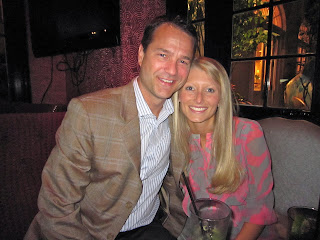 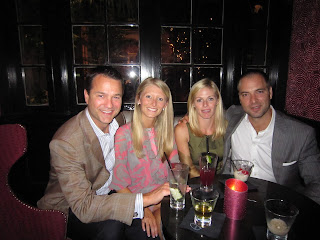 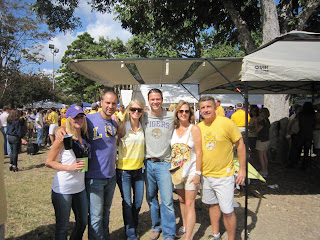 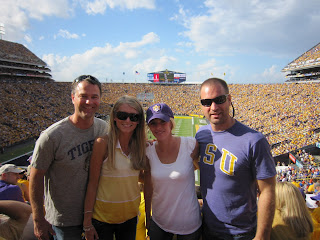