What a week it has been! It all started Sunday night. Thomas had been a little congested, but I wasn't sure if he was getting a cold (since Henry has one) or if it was just the normal newborn congestion. Sunday night is when I knew - he started coughing and it truly broke my heart. He was happy as could be and it didn't seem to be bothering him. It selfishly worked out just because we already had his 1 month appointment Monday morning. He's a growing boy:
Weight - 9 lbs 5 oz
Height - 20 3/4 inches
almost exactly what Henry was - not that I'm comparing or anything :)
I voiced my concerns about the cough to the doctor and she examined him a little more thoroughly. He sounded great and he wasn't in any distress so she advised me just to watch him closely.
His cry was so hoarse that you couldn't (and still can't) hear him cry so I had him sleep next to me in bed. (Henry ended up leaving for Nashville Monday night, so it was just me in the king size bed so there was plenty of room!) Monday night he slept for a 6+ hour stretch so I wasn't sure if it was because he didn't feel well or just because he was getting bigger.
Into Tuesday he started feeding shorter amounts of time, but more frequently. He was still wetting diapers so I just paid close attention to him. Tuesday night he continued to worsen and this is where being a PICU nurse almost makes it worse. Since I see them when they are REALLY sick, I wasn't sure if I was overreacting or if he was really in need of another check from the doc. Wednesday morning he started to have a little trouble breathing, he was having retractions and belly breathing and he was so tired. I decided that I'd rather be safe than sorry so I called the doc. I got an appointment, called the babysitter for Henry and then called daddy to tell him what was going on. He was at the Nashville airport heading to Salt Lake City, however his plane was grounded due to landing gear failure - Awesome (sarcasm!). He decided to take his time trying to get on another flight to Utah to see what was going on here. God must have been watching over us because he couldn't get another flight to Utah in time for his meeting and ended up getting a direct flight to Philly an hour later.
We got to our appointment with the Pediatrician and they checked him out immediately. He was having labored breathing and not getting adequate oxygen at times so she sent me to the Children's Hospital. I had to drive there (40 minutes) in the pouring rain - not that it wasn't stressful enough already and I was alone. On the way there I called the attending physician from the floor I work on and he was able to pull some strings and get us through the emergency room in no time. We got the red carpet treatment our entire visit - a perk to working there! They gave Thomas an albuterol treatment to see if that would help open his lungs. It helped a bit but then they decided to give him some fluids (yes the poor little man had to get an IV) so he wouldn't get dehydrated and ordered a chest x-ray to check for a pneumonia. The x-ray was negative meaning that there was no pneumonia present - thank God! They diagnosed him with having a bronchiolitis and sent a respiratory panel which will give it a specific name and length of time - that's currently still pending.
We got to our room around 7 pm and the care we received was top notch. Henry went home to spend the night with the little guy and I stayed with Thomas. I didn't really sleep at all - which wasn't a concern of mine anyway. The docs from the ICU came up to check on him which was awesome since I know how busy they get. He started keeping his feeds down (he was coughing so much prior that he'd throw his entire feeding up). They stopped the fluids in the morning and he was back to feeding well. They watched him for the day and he improved dramatically. The illness he has peaks around 3-5 days and he was admitted on day 4 which makes total sense.
We were able to come home last night. He still has the nasty cough which is heart breaking but looks and feels so much better - he is just so much more awake and aware.
It was such a scary experience but we are blessed with how it turned out.
Thomas in the Emergency Department (5 weeks) 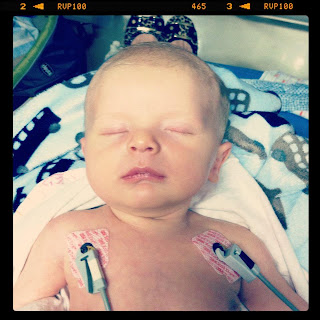 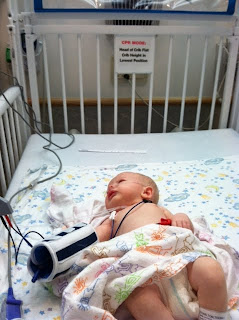 He was on oxygen for a little while 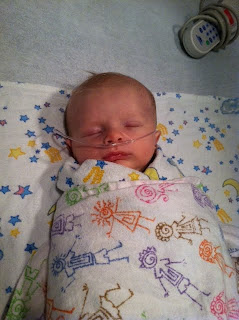 Getting ready to go home! 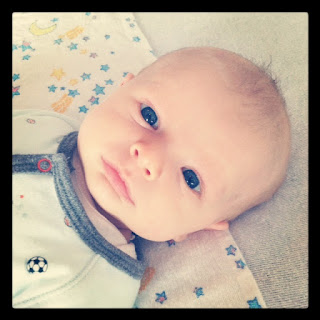 Milestones:
On a positive note - he smiled his first true gummy smile at the hospital (go figure!)
He had his first hospital experience
And when we got home we gave brother Henry a bath. Daddy set him on the toilet and he went potty for the first time - YAY Henry. He clapped when he was done and we praised him as well. We'll see if it continues!
Thank you all for the kind words and prayers
Posted by Tara at 8:46 AM